Come visit Soldier Hollow and see the world’s most highly trained dogs (border collies) and their handlers test themselves on Soldier Hollow’s Olympic Hillside. Working up to 400 yards from their handler – these dogs must work with precision and gather wild range Rocky Mountain ewes, bringing them down the mountainside along a preset course and through freestanding gates. The process ends in front of the stands where the dog must separate certain sheep from others and then place the sheep in a small pen.  The work is judged for quality and care of the sheep and must be completed in just 13 minutes.  It has a beauty and intensity that is captivating!

SCROLL DOWN FOR THE 2019
FIELD OF COMPETITORS

(Click the column headers to sort.  Once for A-Z; Again for Z-A) 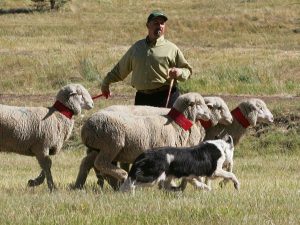 It’s not too late to qualify on merit.  There are still trials seeding winners into this years Soldier Hollow Classic (Bluegrass, Table Top).

The Soldier Hollow Classic is an invitational sheepdog trial open to all competitors throughout the world.  Most invitations are extended based on performance at selected trials with additional invitations extended based on double lift trial performance, career record and additional discretionary considerations.  We invite you to support the trials below and also to contact us if you know of a handler who might otherwise be a candidate for competition at the Soldier Hollow Classic.  In the event the Champion at a qualifying trial has already qualified for Soldier Hollow, the invitation will pass to the Reserve Champion.  If both have qualified, the invitation reverts to discretionary status and will be awarded at the discretion of the event.  Handlers qualify based on the first trial they qualify in.

*We invite contact from any Champion or Reserve Champion of major double lift trials outside North America.  As a matter of course, we will try to contact winners of National and International Championships, but sometimes acquiring appropriate addresses is difficult.  Please contact us if you feel qualified to compete and you are able to attend for consideration for invitation.